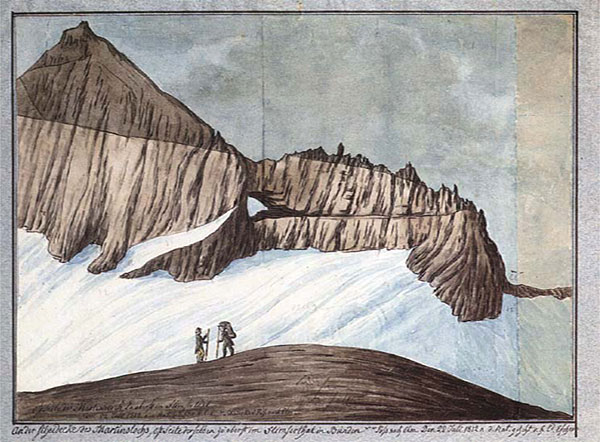 On the 22nd July 1812 Hans Conrad Escher painted his famous watercolour of the Tschingelhörner and Martinsloch (above). What's interesting about it is that, although he identified the uppermost layer of rock as being older than the underlying layers, he could offer no explanation for how this might have come about. And so the painting triggered a debate about how the Alps were formed and counts as a milestone in the history of geology.

Reason enough, thought Kaspar Marti of the Geopark Sardona (UNESCO World Heritage Site "Tektonic Arena Sardona" since 2008), to see how artists today would portray the scene and how geologists interpret their latest findings. As a result, interested mountain painters, including members of the Guild of Swiss Mountain Painters were invited to gather on 22nd July 2012 at the place where Escher did his painting 200 years ago and to re-interpret the scene in their own way.

Because of persistently unfavourable weather conditions the planned assembly had to be called off and it was left to the individual artists to make their own arrangements to visit the scene. Even so nine artists took part, including six members of the Guild, and their works were first shown on 1st November 2012 in the UNESCO Visitor Centre in Elm, together with the unveiling of a new 3-D geological model of the Glarner Overthrust area.

In December the exhibition was relocated to the Linth Arena in Näfels, where the paintings were on display until February 2013. Before the move I had the opportunity to paint a second picture, also depicting the Martinsloch and the Tschingelhörner but from the Elm side and in winter instead of summer. The two paintings were shown side-by-side in the Linth Arena. 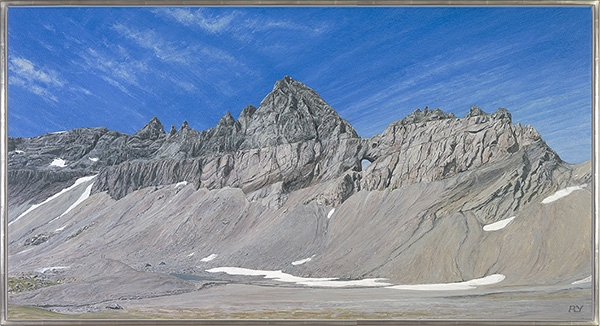 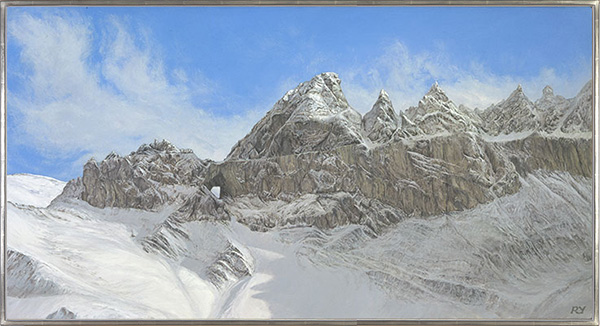